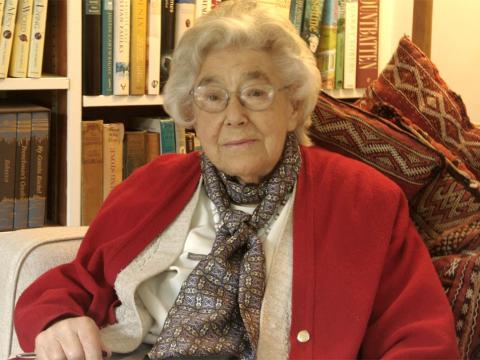 In May 2010 Margaret Jackson unveiled a plaque at 64 Baker Street in London marking the headquarters of the wartime Special Operations Executive (SOE).

"I do so," she said, "with great humility, in memory of the leadership and professional, amateur and dedicated gifted men and women of Britain and other Allied countries who served tirelessly here and near Baker Street to encourage the spirit of resistance—the spirit of freedom – worldwide, until victory was won."

There, 70 years earlier, Jackson, aged 23, had joined the SOE staff as the secretary and personal assistant to its executive director, Brigadier (later Major-General) Colin Gubbins. Jackson had graduated in Modern Languages from London University when her elder sister, Anne, who worked in the War Office, heard that Gubbins was looking for a French-speaking secretary. The sabotage force, founded in 1940, was charged by Churchill to "set Europe ablaze" through acts of guerrilla warfare in the Nazi-occupied countries.

Jackson joined Gubbins in Paris, where he headed the mission set up to liaise with resistance movements run by the Polish and Czech authorities in exile. On 9 May 1940 German armoured divisions invaded France. Jackson escaped back to London on a hospital ship carrying wounded British soldiers, sailing from St Malo the day after Paris was taken. The next day a French army officer, Charles de Gaulle, appealed to all the French to rally to him in London.

Gubbins was posted to train secret units of the Home Guard, in anticipation of a German invasion, with Jackson as his secretary. They set up headquarters in a house in Wiltshire where, in the stables, they trained recruits in the use of Molotov Cocktails, hand-to-hand combat and "silent" killing with bare hands. The young men and women SOE volunteers faced extreme danger. If captured they were likely to be executed. Jackson knew that SOE was inevitably sending some of them to their deaths.

Gubbins saw SOE's role as part of the strategy to give people in the Nazi-occupied countries the hope of freedom—and to restore their honour. The Secret Intelligence Service (better known as MI6) tended to regard SOE as amateurs. "An action service was not seen as compatible with an intelligence service," Jackson commented. "Whenever they had a disaster they could lie low. But SOE agents had to make a resounding bang and expect either to get away or be captured and killed. The war for priorities within Whitehall was almost as fierce as the war against the Germans."

Jackson co-ordinated the work of SOE's senior secretaries. Security was paramount: papers had to be locked up or shredded, and diaries and blotters removed every night. The SOE codemaker Leo Marks wrote in his book Between Silk and Cyanide (1999): "[Gubbins'] secretary, Margaret Jackson, had everything we sought for in a woman except availability." Indeed, she had been brought up with a strong Christian moral conviction.

Margaret Wallace Jackson was born in St John's Wood, London, in 1917, and spent her childhood in Argentina, where her father was the manager of British tramway, light and power companies. Her Scottish parents taught their four daughters "to live their faith", which Margaret held throughout her life. She was educated at home by governesses until the age of 13, when she was sent to a Methodist school in England. Following her father's death in 1934 the family returned to Britain.

After university and secretarial college she entered the typing pool of BBC radio news. The work was excruciating – "If you made a mistake you had to correct five carbon copies" – before moving to the Royal Institute of International Affairs at Chatham House and following its library to Oxford when it was evacuated at the outbreak of war.

When SOE was disbanded in 1946, Jackson was awarded the MBE. She joined the Allied Commission for Austria in Vienna, working in the British Political Division. It was the beginning of the Cold War and her experience there, and then at the Organisation of European Economic Co-operation (OEEC, now the OECD) in Paris, gave her a keen sense of the ideological forces at work.

The OEEC, where Jackson was a deputy secretary of the Council for nearly four years, implemented the US aid programme to Europe under the Marshall Plan, which she saw as "a most satisfying and thrilling sequel to the war". This left her with a passionate conviction for European unity. She was distressed by the scepticism with which some in Britain viewed the European Commission, believing that they underestimated the miracle of post-war Franco-German reconciliation.

Returning to Britain in 1952 she joined Information Research, a new Foreign Office department, and was posted in 1960 to Melbourne as an information officer. But her time there was cut short following her encounter with the Moral Re-Armament (MRA) movement, which was well established among the "wharfies", or dock workers.

She found herself rethinking her own values; she wrote a confessional letter to her mother saying, she recalled, that she wasn't "God's woman that she expected me to be". The UK High Commissioner in Canberra told her to break with MRA after a British MP accused her of being a "political member" of the Information Service. She refused and the matter was dropped. However, she resigned and returned to London in 1962, where for nine years she worked for the National Rubber Producers Association of Malaysia.

Following her retirement in 1978, Jackson plunged into local politics, serving as a Conservative on Southwark borough council for eight years, and as member of the executive committee of the Southwark Race and Equality Council, winning wide respect across the political divide. She latterly lived in a Methodist retirement home in Croydon. She wrote her wartime memoirs, now housed at London's Imperial War Museum. She is survived by two of her sisters, Elisabeth and Patricia.