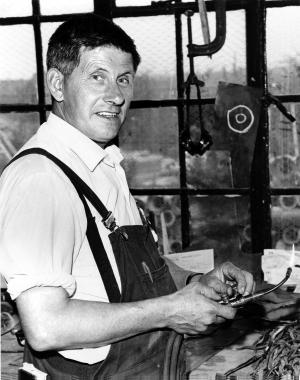 Brutality suffered at the hands of others marked the life and psyche of Les Dennison: illegitimate son of a Mayfair skivvy; coal miner and plumber; class warrior and communist cell leader; and war prisoner of the Japanese on the infamous Burma railway.

Yet Dennison was to find redemption through unlikely sources: a fellow building worker and a repentant Japanese general. From then on, he refused to cast himself in the victim role, and he became known, in his home city of Coventry and internationally, as a force for reconciliation, particularly towards Japan.

Les Dennison, christened Brannen, never knew his wealthy father. When he was six months old, his mother took him to Tyneside where she married a miner, Bill Dennison. As the “bastard” son, Les felt himself the whipping boy and drudge to his stepbrothers and stepsisters, his anger driving a wedge between them. He was sent down the mines, aged 13, terrified of the dark. They lived in grinding poverty and, aged 19, he went in search of work in the Midlands, soon moving the whole family to Coventry. There he joined Keresley pit and the Communist Party. He met Vera Painter and they were married in 1938.

At the outbreak of war he joined the Army Service Corps as a fitter. He was captured by the Japanese at the fall of Singapore in 1942. A 19-day forced march through the jungle took him and his fellow POWs to the notorious Burma railway, where they were employed as slave labour. The work included building the last stretch of one of the bridges over the River Kwai between Burma and Thailand. Cholera and dysentery were rife and none of his friends survived. He worked there for three years and seven months in appalling conditions, and witnessed the decapitation of 14 of his fellow prisoners. Seizing a chance for revenge, he killed a Japanese guard at the edge of the river, throwing him into the rocks and water below. Forced to carry his dying comrades, Dennison was one of only 400 survivors out of a group of 1,600 POWs. On liberation he weighed just 5 stone, 4 pounds.

Anger burned in him and his young wife, Vera, whom he had treated with violence, was hardly glad that he had survived the war. On his return to Coventry he donated part of his war gratuity to the local communist party, trained as a plumber and was an agitator at the Standard Motors car plant before joined the building industry. He became convenor of shop stewards on a site, in charge of nearly 400 men.

In 1959 a plasterer and fellow shop steward, Stan Peachey, confronted him about his family life. The “brotherhood of man” didn’t work there, and he was a dictator in his home, Peachey said. The men on the site feared him. Peachey and his Christian friends spoke to Dennison of revolution beyond Marxism—building a “hate-free, fear-free, greed-free world”.

Their care for him seemed sincere and this so shook Dennison—by now disillusioned with communism following the Soviet suppression of the Hungarian uprising in 1956—that he began a search to “find God”. With diffidence he approached a local vicar and, in an empty church, the two men prayed together. “I had talked about peace all my life, but I’d never known what inner peace was till then,” commented Dennison, who later converted to the Roman Catholic faith.

Thus began a transformation in Dennison’s family life. He had thrown his eldest son Karl, named after Karl Marx, out of the home for wanting to marry a major’s daughter, which Les had seen as a class betrayal. Now he apologised to his son and they were reconciled. Vera, who had been about to leave home with their three other children, could hardly believe the change in Dennison, who now began to cherish her.

At work, too, he found a new motivation in meeting the housing needs of Coventry citizens rather than observing strict demarcation lines. He began insisting from his fellow workers on “a moral day’s work rather than a legal day’s work”. Productivity, and wages, shot up. Brickies who had been laying 400 to 500 bricks a day now laid 1,200. The then Coventry South MP and Housing Minister, Richard Crossman, commented on the “dynamic force” of building trade workers, at a dinner hosted by them for him. In 1966, Dennison’s story was dramatised in a youth production, It’s Our Country, Jack! , which toured Britain for nine months.

In 1962, Dennison encountered a Japanese group at the Moral Re-Armament centre for reconciliation in Caux, Switzerland. A retired Japanese General, Ichii Sugita, who had been at the surrender of Singapore in 1942, bowed low before Dennison, telling him: “I don’t ever expect you to forget what happened. I beg you to forgive me and my nation.” The encounter, described in Michael Henderson’s book Forgiveness: breaking the chain of hate (2002), deeply touched Dennison, who commented that Sugita “was genuine and that was the beginning of a remarkable change in my attitude. For a long time I felt bitterness and hatred but I don’t want that to be passed on to the second generation.”

Dennison, a member of the British veterans’ Burma Campaign Fellowship Group, subsequently visited Japan in journeys of reconcilation. In a BBC interview broadcast from Japan marking the 50th anniversary of the bombing of Hiroshima, he was asked what he would say to the Japanese nation. He replied:

In 2002 Dennison took part with the then Japanese ambassador, Masaki Orita, in a ceremony of healing in the ruins of the old Coventry Cathedral. Dennison told the local paper: “Quite a few of my comrades try to hang on to their twisted bitterness, but if you want a decent world the only way forward is reconciliation.” The following year, he was in a second reconciliation ceremony, alongside Ambassador Orita, at the city’s inauguration of a Hiroshima Nagasaki Atomic Bomb Exhibition. Ambassador Orita wrote to Dennison: “It is through the efforts of brave people like you that British and Japanese people are able to grow closer together in the spirit of peace and friendship, without forgetting the past.”

Last year, the Royal British Legion poppy day appeal featured Dennison, sitting in his wheelchair in a field of poppies, on their poster campaign.

“He was a warrier,” remembers the journalist Graham Turner, who wrote a chapter on Dennison in his book More than conquerors (1976). “The idea that the world could be remade absolutely gripped him. He was always looking for the big idea. He had no time for chips on his shoulder or anyone else’s shoulder.”

First published in The Independent, 28 April 2006.