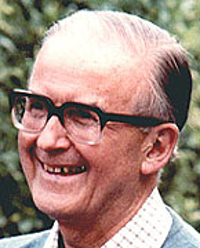 Kenneth Belden was chairman of the trustees of the Westminster Theatre during the 1960s and 70s when it was the centre of Christian drama in the West End.

Kenneth Belden was the chairman of the trustees of the Westminster Theatre during the 1960s and 70s when it was the centre of Christian drama in the West End. Belden’s vision and drive turned the theatre—developed out of the shell of the 18th century Charlotte Chapel—into a modern arts centre with some of the best theatre facilities in London.

The aim was to present plays that would "give people new courage and purpose". Belden saw the theatre as a bid to change the moral climate of the nation at a time "when the kitchen sink, the theatre of cruelty and the theatre of the absurd dominated the London scene". He was particularly interested in the palpable effect that professional Christian drama could have on people. He delighted in stories of couples leaving the theatre determined to patch up their failing marriages or trade unionists and employers finding common purpose.

The theatre had been bought in 1946 by the Westminster Memorial Trust, set up by the Moral Re-Armament (MRA) movement as a "living memorial" to those who had died in the war against Hitler. Returning servicemen donated their war gratuities towards its purchase. Several of Belden’s close friends had been killed in the war and he believed theatre could convey the values needed to underpin freedom and democracy.

At first the Westminster staged MRA’s amateur productions. But in 1961, when Belden took charge, the trust began hiring professional casts, in plays and musicals written mostly by Peter Howard and Alan Thornhill.

Howard’s Christmas pantomime Give a dog a bone ran for 11 seasons. One season included an unknown Elaine Paige and another the singer Liz Robertson. Howard’s Mr Brown comes down the hill was a hard hitting play about what might happen to Christ were he to return to the modern world. Thornhill’s popular musical Ride! Ride! was about John Wesley, while his play Sentenced to Life, written with Malcolm Muggeridge, look at euthanasia. High Diplomacy, a musical by Alan Thornhill and Hugh Steadman Williams with music by Will Reed, starred the American mezzo-soprano Muriel Smith, while a satirical review, GB, starred the French mime artist Michel Orphelin. Other plays addressed drug addiction, industrial conflict, class war and the Cold War.

The Westminster also pioneered "A Day of London Theatre" for schools, which, over 22 years, was attended by over 200,000 pupils and teachers. Parties were taken behind the scenes and then saw a performance.

Kenneth Belden was born in Banbury in 1912, the son of a distinguished Congregational minister, and was brought up in Crowhurst, surrounded by people of the cloth. At the age of five he precociously asked his mother, "What exactly is the Trinity?" He inherited his father’s cheerful disposition. But he was inhibited by shyness and by the time he went up to St Edmund Hall, Oxford, in 1931 to study history he had lost his faith, in despair about his weaknesses which he thought were beyond the reach of a merciful God. His encounter with the Oxford Group, the forerunner of MRA, completely changed his life.

The Group’s advocacy of taking time to listen to the "still, small voice within" particularly touched him. It was like "being lifted to a new level of living", he wrote in his book The hour of the helicopter (Linden Hall, 1992). He never looked back and, on graduation, felt called to work full time with the Group. His artistic talents, particularly as a typographer, were employed in running the Group’s publishing. "Designing a piece of print was like writing a sonnet," he said. He worked closely with Stella Corderoy developing MRA’s publications and they were married in 1946. That year, MRA’s international conference centre for reconciliation opened in the Swiss Alpine village of Caux, and Belden and his wife later spent four year in Switzerland from 1948, helping to run the centre.

Returning to London 1952, Belden joined the Council of Management of the Oxford Group, the registered Christian charity that had launched MRA. He came to his post at the Westminster almost by default. The theatre’s trustees included the 1930s tennis star Bunny Austin and his actress wife Phyllis Konstam. They wanted an additional trustee from the Oxford Group’s Council. Belden was the only person available at the time. Within weeks he was elected the trust’s chairman. Thus, the son of the Manse found himself an impresario, mounting plays from the pulpit of theatre, that aimed to counter nihilism with a message of faith and hope.

Already in 1955 Belden, walking past the theatre’s courtyard, had realised "with the absolute force of revelation" how the site might be doubled in area to include a restaurant and conference facilities, a spacious foyer and adequate dressing rooms for the actors. Now, he found himself in charge of raising the £500,000 needed. It was a daunting act of faith in which he was sustained by a line from Thomas Traherne: "Wants are the fountains of felicitie". Welsh slate was donated to clad the building’s facade, while a Sudanese government minister gave a gift of leather for the foyer panels.

The new arts centre was opened in 1966, dedicated by the Bishop of Colchester, and was further expanded in 1972 with two additional floors of offices for MRA. In the first 10 years alone of Belden’s tenure, over a million people from 100 countries paid for tickets at the Westminster.

Belden retired in 1980 and 10 years later, with production costs rising prohibitively, MRA pulled out of professional theatre. The Westminster, whose history Belden wrote in 1965 (The Story of the Westminster Theatre) was eventually sold in 1998. The building was unfortunately gutted by fire earlier this year. MRA, renamed Initiatives of Change, has relocated its London headquarters in Victoria.

In retirement, Ken Belden enjoyed his move to a small community in Knebworth, Hertfordshire. He was an active member of the local church, St Martin’s, and widely respected in the village.

First published in 'The Independent', 4 December 2002