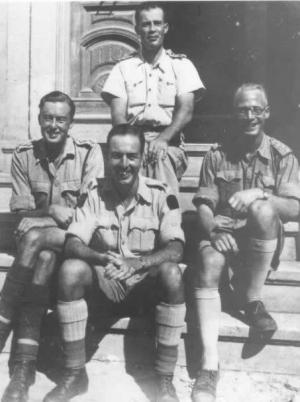 Born in Dublin of Scottish Presbyterian parents, Stewart was a house surgeon in Belfast when he volunteered for war service in 1940. He was a captain in the British eighth army, as second-in-command of a beach-landing medical unit, during the invasion of Sicily in 1942. They landed before dawn on July 10th and tended casualties on the beach near Syracuse.

Stewart recalled: "An engineer who had been clearing the mines had been severely wounded in the thigh by an exploding mine and needed the immediate application of a tourniquet to control the bleeding; then we carried him the few yards to the shelter of the trees and set up an intravenous drip to treat him for shock, hanging the bottle of serum from the branch of an olive tree."

Catania fell quickly and in a huge hangar, Montgomery briefed them about the next day's landings on Italy, across the Strait of Messina. They landed in Reggio, where Stewart's medical section occupied a large villa near the beach to receive casualties.

The eighth army made rapid progress north and Stewart's medical company boarded "a ramshackle Italian train", heading for the port of Taranto. Stewart was appointed port medical officer. Days later he took over an ambulance train operating between the eighth army railhead at Termoli, half way up the Adriatic coast, and the hospital ships in Bari and Brindisi.

In February 1944, he was ordered back to Britain to help pass on landing experiences to the British second army preparing for the D-Day landings. His field ambulance company landed in Normandy on D-Day plus six - June 12th. The allied forces had pushed the German army 10 miles inland and in the apple orchards, the RAF bulldozed 13 airstrips to allow Dakotas to fly in with ammunition and to evacuate casualties.

They had a one-hour turnaround time, each aircraft returning with 24 stretcher cases and six sitting, and Stewart co-ordinated the hectic logistics between the hospitals and airstrips. He rode two-stroke motorcycles and dropped with the paratroopers. He later recalled that as the carburettors choked up with dust and sand, "I got through about a dozen in a couple of weeks".

At one point a huge storm blew up, halting air traffic, as he was evacuating 50 casualties in a dozen ambulances. Not knowing what to do, he prayed for inspiration and felt urged to go to the beach. There to his astonishment he found an old friend from university, now a navy medical officer, who took the casualties aboard his tank landing craft.

Promoted to major and given command of a field ambulance company, Stewart followed the allied advance to Belgium, where Dakotas flew up to 500 casualties a day from Brussels to British hospitals.

His field ambulance company joined the allied advance across the Netherlands, spending two months dug in on the west bank of the River Maas. His HQ was in a house two miles back from the river bank exposed to German mortars. "The evacuation of the wounded was very dicey and much of it was done under cover of darkness."

On March 22nd, 1945, he took part in the daring dawn assault across the steep banks of the Rhine. He was soon ordered to join a HQ unit in Eindhoven, preparing to enter Berlin. His medical unit was in Utrecht when armistice was declared on May 8th. "As we drove into Berlin we were struck by the colossal devastation wrought by the allied bombing . . . it was pathetic to see half-starved and exhausted German women and children picking over the bricks."

In Berlin, he arranged for the medical care of allied troops and civilian staff at the Four Power Summit Conference. Awarded the MBE in 1945 and mentioned in dispatches, he was discharged on December 31st, 1945.

Stewart was deeply concerned about the need for post-war reconstruction in Europe. He was based in Italy for 10 years, as a volunteer with the Moral Re-Armament (MRA) movement, which had opened its centre for reconciliation in Caux, Switzerland, in 1946.

He joined a small band of MRA volunteers in Milan, visiting factory workers and employers at a time when communists and Christian Democrats struggled for control of Italy's industrial heartland. Stewart and his colleagues brought groups of workers and employers, from the giant Falck steelworks and other industries, to MRA's annual conferences in Caux.

In 1960 Stewart married Dorothy Page - they had first met in Belfast in 1940 - and she joined him in Italy for the next five years.

Stewart was believed to be the last surviving Trinity scholar of his generation. He had won an entrance scholarship in Irish and took an honours degree in French and Irish in 1933. That summer he attended an evangelical conference in Keswick, "which changed the course of my life". He promptly felt he should study medicine "and use my training to serve people".

In his third year of medical studies he attended a conference of the Oxford Group, the forerunner of MRA. Stewart found the group's emphasis on absolute moral standards "brought more disciplined into my life", including a decision to quit smoking.

After Italy, Stewart returned to Kingussie, Scotland, for 10 years, before moving to a medical practice in Tarporley, Cheshire. There he acted as doctor to MRA's nearby residential conference centre, Tirley Garth. He and Dorothy retired to Bangor, Co Down, nursing five members of his family through terminal cancer.

He died in Galway on June 11th.