Incubating enterprise in the Black Country 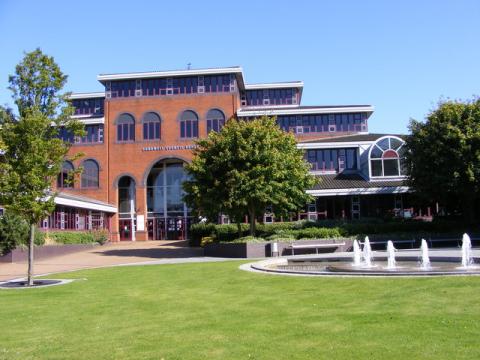 The Black Country: the very name conjures up images of the smokestacks of Britain's industrial revolution. On an overcast autumnal morning recently, the overall impression was grey rather than black. The occasional tall chimney still belches out grey-white smoke. Red brick housing estates and new offices with shining windows give a dash of colour. Towns merge from one into another in one vast, sprawling urban area with no green belts between. Derelict brownfield sites are crying out for redevelopment.

The area, north of Birmingham, covers four boroughs: Walsall, Wolverhampton, Dudley and Sandwell (photo: Sandwell Council House). The last was put together in 1974 as an amalgamation of six towns with a population of 300,000. Bill Woodhouse, Director of Sandwell Enterprise development agency, admits that Sandwell suffers from an image problem - 'a lack of identity'. Had they named it after West Bromwich, one of the largest towns, everyone would know it because of the football team, he says. West Bromwich Albion, after all, is up there in the First Division.

Woodhouse and his team are determined to put Sandwell on the map. Along with other regeneration agencies, they have been working for the past 14 years to transform an area that is an industrial blackspot: male unemployment at almost twice the national average; educational standards low in the nation's league tables; and one of the highest rates for single-parent mothers in Britain.

The area has traditionally serviced the big car manufacturers in Birmingham and Coventry, and 42 per cent of Sandwell's jobs are still in manufacturing, over twice the national average. But too many of the local industries could be transferred to the developing countries, says Woodhouse, and the great need now is to find the new growth businesses of the future.

At Sandwell Enterprise, just off the high street in the centre of West Bromwich, the bright green shutters are rolling up at 8.30am. Inside, the small staff of 20 are bright too-motivated by the impact they are having on small businesses and jobs.

The enterprise agency provides three basic services: counselling for the unemployed-including such basics as how to write a CV-and for those in jobs who want to set up their own small enterprises; business skills training-from book keeping and VAT returns to marketing and computers-leading to National Vocational Qualification (NVQ) certificates; and support, including capital loans, to get 'micro-businesses', of one to 25 employees, up and running.

Woodhouse admits that it is not easy to keep track of their survival rate-former clients don't always reply to questionnaires. But there have been notable successes, such as the Asian engineering company now employing 50 people; the aluminium window manufacturer, started by two partners who now employ 200; and the young man aged 17 who approached Woodhouse nine years ago and now runs a road haulage firm with 75 employees and 60 trucks.

To get such businesses started, loans are given at 5 per cent interest from three capital funds totalling GBP700,000. Woodhouse says they 'begged, borrowed but never stole' the seed money from established firms such as Cadbury Schweppes and Boots the pharmacy chain, as well as major banks and the erstwhile Black Country Development Corporation. Richardsons property developers gave GBP50,000 for a Youth in Business Fund.

It is high risk investment which banks might often shun. Woodhouse admits that sometimes they've learnt the hard way, such as the time they lent GBP5,000 to a 'charming' young single mother who wanted to start a photographic studio. When she took photos of the mayor his head was chopped off. 'We never checked her technical skills. Now, if someone comes in wanting to be an electrical contractor, the first thing we ask him is, "What do you know about electricity?"' says Woodhouse.

Sandwell Enterprise also runs a Business Development Centre-34 modern 'incubator units', or workshops, which tenants can rent at nominal rates for two years while they establish their own small businesses. The aim is to provide on-site support at a time which can be very scary for them, says Woodhouse. 'It is a very lonely world being in business on your own. You are isolated in many ways. If you start a new business you put your livelihood and your future on the line.'

Chris Cooper, a former Barclays Bank corporate manager who runs the centre, says it gives financial, operational, legal and moral support-and the occasional 'kick up the backside'. The whole concept is to 'improve survivability'. He reckons that 80 per cent of the small businesses that have passed through the centre since it opened in 1991 are still going strong.

Businesses currently in the incubator units include a teaching agency, coordinating supply teachers to schools; a stationary supplier; Global, which manufactures lubricants and specialist oils; and Big Top Promotions, run by a clown called Bendini who finds clowns for children's parties and other events. Badhan Ram got a loan of GBP1,500 from Sandwell Enterprise to start his business last June, turning out machine parts. He says he is doing well-the evidence lying in a bright red bag of golf clubs in the corner of his unit.

In the huge task of regenerating the whole region, Sandwell Enterprise works in partnership with a range of other agencies, including Sandwell Training and Enterprise Council, the chamber of commerce, local government, Business Link, and Prince Charles' Youth Business Trust. A quarterly economic forum brings all the Black Country initiatives together to exchange ideas.

They aim to encourage inward investment into the region as well as to create local businesses-a Herculean task in an area that suffers from poor transport infrastructure, pockets of dereliction, and lack of executive housing. Sandwell has 57,000 council houses, but Woodhouse says that entrepreneurs looking to start up new businesses end up, like himself, having to live out of the borough in Birmingham or Bourneville and this can be a real disincentive.

Then there is the macro-economic scene. Up the street from Sandwell Enterprise, Varinder and Kulwant Malhi are making their Ranger International brand of high class country, sports and leisure wear exclusively for export. Their small business was started thanks to support from Sandwell Enterprise. But they have found it a struggle in the face of global recession and high interest rates.

Woodhouse was originally seconded to Sandwell Enterprise from Cadbury Schweppes where he had been a project manager developing new plants. But it worried him that automation was displacing people, and he wanted to see what he could do to help young people in particular. 'This has been the driving force.' He says that, contrary to the stereotype image of unemployable drop-outs, there are many 'good young people around. Regeneration is all about people.'

He has had empathy for the young ever since his own impoverished childhood in Yorkshire where he was one of 16 children. Aged 21 he was packing chocolates on the night shift at Cadbury's. He was spotted as having management potential, though it took him 13 years of sheer grit at night school to gain his managerial qualifications. When Cadbury's offered him early retirement in 1987 he took the job of Director of Sandwell Enterprise. In 1991 he was awarded the MBE in the Queen's honours list for his services to job creation.

Alan Bretherton, Chief Executive of the National Association of Enterprise Agencies, says it is invidious to single out any one of Britain's 209 approved agencies. But he is impressed by Woodhouse's 'energetic and forward looking approach', especially in employing and developing young people on the agency's staff itself, who could earn more elsewhere. 'He is motivating them and accepting that they will go out and do better things still.'

When Woodhouse retires at the end of this year, he will have the satisfaction of knowing that he and his team have brought colour and hope back into the lives of thousands of people who have found jobs in the Black Country.

First published in For A Change magazine, 12 January 1998