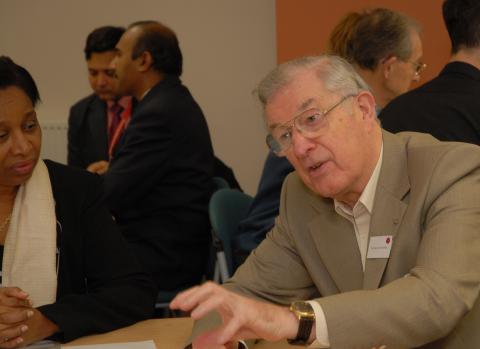 How do you tackle social exclusion and regenerate deprived inner-city areas? Michael Smith on a radical Nottingham project to involve local people.

Nottingham boasts that it is one of Britain's five most prosperous cities, with enough job vacancies to cater for all its unemployed. But, like all big cities, there are pockets of acute deprivation. In run-down neighbourhoods, unemployment among ethnic minorities is almost 25%. Burglary and car crime - often drug related - run at twice the national average. And the city has some of the nation's worst performing schools.

How do you engage the alienated and socially excluded in a programme of urban renewal? It's a question at the forefront of ministers' minds, following the launch this week of the government's neighbourhood renewal action plan. But it's one that Nottingham's civic leaders have long been wrestling with.

Nottingham council spends £45m each year. Yet throwing money at the problem is not enough, says John Taylor, a councillor who also chairs Nottingham health authority. "The one-size-fits-all and the we-know-best approach of the local government authority was not working."

The city's Radford and Hyson Green inner-city districts have been the focus of repeated regeneration programmes for 25 years. "Yet they are no better today than they were, and are still the most deprived areas of the city," Taylor says. "We were doing it all wrong. Everything was top down, imposed and property-focused, rather than home grown. We had to look at regeneration differently.

"There was a need for a level of devolved local decision-making below local government - you might call it an urban parallel council."

A partnership council (PC) covering four inner-city wards was launched as an independent, limited company after consultation with some 900 households. It has proved an effective vehicle for channelling European grants worth £5.4m. At the heart of the PC are seven forums: three for residents and one each for the business, voluntary, public and local government sectors. Three representatives from each make joint decisions at the PC's monthly board meetings.

The PC's chairman, Richard Hawthorne (above), a local printing company director, says that what makes the body effective is its emphasis on "honest conversation" in order to improve service delivery. The phrase is stock-in-trade in the US, particularly in reference to inter-racial dialogue. Hawthorne is an activist with Hope in the Cities (Hic), a coalition initiated in Richmond, Virginia, which aims to promote honest conversation on race, reconciliation and responsibility. Two years ago, Hic advised President Clinton's initiative on inter-racial understanding.

In Britain, Hic has offices in London and Liverpool and emphasises "creating trust-based relationships where all are valued and everyone is empowered to fulfil their potential", according to coordinator Lawrence Fearon. His colleague, Gerald Henderson, says Hic acts "as a support network for others who are taking initiatives".

In Nottingham, the PC's working groups provide a natural vehicle for honest conversation. Hawthorne says: "There is much that goes on in our cities that is not honest and there is so much griping. Honest conversation is not just a question of venting hurts, but being honest about one's own situation, feelings and mistakes. This needs to be done with a sensitivity to where the other person is coming from - and being aware of historic hurts and the drive to control which so often undermines inclusion."

Honest conversation has worked at Build, a mentoring programme for black teenagers, which occupies the top floor of a converted textile factory in Radford. Half a dozen state-of-the-art computers, with video editing, give the teenagers a chance to learn IT skills. A staff of 14, supported by some 80 volunteer mentors, helped 300 people last year and the numbers are rising. Build's chief executive, Michael Henry, says this has helped several go on to higher education.

Henry's relationship with the PC has not always been plain sailing, however. At one point, frustration boiled over and he began to walk out. At that moment, Hawthorne spoke about the need for honest conversation. Henry says he found the phrase so riveting it stopped him in his tracks and he stayed.

Build successfully delivered the PC's cross-cultural networks project. This persuaded the Home Office to award Build a £182,000 "connecting communities" grant, which will extend the networks project throughout the city. Henry says: "There is huge potential in bringing together groups as diverse as Polish, Ukrainian, Italian, Vietnamese, Asian and black communities, to talk about their experiences and be empowered to suggest what is right for their communities."

The emphasis on grassroots empowerment is at the heart of the PC and its greatest success is in delivering a local agenda, says its coordinator, Christina Ashworth. She singles out action to tackle street crime. Honest conversation revealed that residents wanted to go "beyond more bars, more locks, more lights", says Ashworth, and wanted to see diversionary activities for young people. Youth clubs run in forbidding old school buildings were not attracting teenagers off the streets. But asking them what they wanted led to a summer sports programme in their neighbourhoods, with plenty of equipment provided.

Residents also called for "restorative justice", which takes young offenders to meet their victims and make reparations - a salutary experience when they see the harm they have done, and a strong disincentive against future crime.

Residents were not just looking for a change in infrastructure, Ashworth points out. "They were saying these are our kids, or our neighbours' kids. It is a different view when you live in a place than living outside and providing services to it."

According to Adrian Dewhurst, who co-ordinates the PC's business forum, involving some 200 local enterprises, tackling social exclusion is "the hinge issue for Britain". Businesses are attracted initially by the benefits they see accruing to them, such as Retail Renaissance, a £2.3m retail redevelopment programme. "But then you get them to think of the wider community, how to make the place safer to live in," Dewhurst says. "You start to touch on their conscience - not just what you get out of it, but what you put into the wider community."

Hawthorne's Printers is cited by the Institute for Public Policy Research, the pro-Labour thinktank, as a good example of "corporate social engagement", the government's new catchphrase for business commitment to social inclusion. The company donates pallets of paper to local schools, welcomes classes to visit the plant and provides work experience for eight schools and colleges. Even so, Hawthorne admits that too few of the company's 90 employees come from the inner city.

He insists that honest conversation must continue between the PC and local residents, especially where there are continuing feelings of exclusion. For Ashworth, the bottom line is not outputs, bar charts and buildings, so much as doing things "in a way that enhances people's dignity and makes them feel included and respected". She would like the government to take a close look at Nottingham's experience. She thinks it might have a thing or two to learn.

Michael Smith is managing editor of For A Change magazine, which focuses on conflict resolution in international and community relations.

This article first appeared on The Guardian website on 17 January 2001. Richard Hawthorne died in 2018. See Obituaries section on this website.