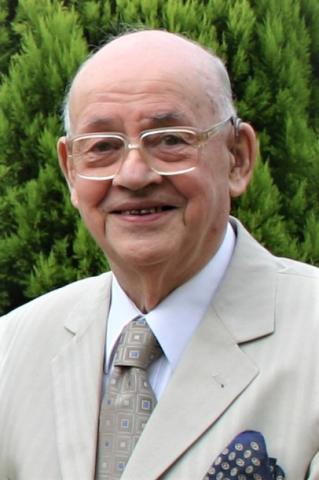 Dundee-born lawyer and campaigner Finlay Moir, who has died aged 99, might have pursued his career as a solicitor had it not been for his encounter with an army chaplain with whom he shared a tent in India during World War II.

He had joined a law office in Dundee in May 1939, four months before the outbreak of war. He took some law exams but, aged 19, was posted to Jabalpur, India, with the Ordnance Corp in 1942.

The padre encouraged Moir “to let God run my life if the Almighty would take me on. I discovered that if I listened, God would speak to me in my heart… The padre’s conviction that God might have a plan for my life was like a reed to a drowning man.” It was the beginning of “a great adventure” which continued throughout his life.

This would take him back to India as well as to post-war Germany, Zimbabwe and South Africa working on reconciliation and trustbuilding through the global Moral Re-Armament (MRA) movement (now renamed Initiatives of Change).

William Finlay Moir quipped that he had it “on good authority from my mother (Charlotte) who was present at the event” that he was born on 10 November 1922. He was born in a two-roomed tenement on Lorimer Street, Dundee, the son of James Moir, a newsagent and tobacconist.

Returning to Scotland as a Staff Captain Legal after the war, Moir handled the divorce cases of military personnel who had spent long spells away from home. But he was now more interested in helping couples to reconcile.

On leaving the army, and following qualification as a lawyer, Moir joined MRA in its post-war reconciliation work and worked with the movement for the rest of his life.

This took him first to Germany’s industrial Ruhr for three years. He and colleagues accompanied trade union leaders from the Ruhr to the MRA centre for reconciliation in Caux, Switzerland, which opened in 1946. The challenge was whether West Germany would fall behind the Iron Curtain, as its Eastern counterpart had. MRA worked in the mining areas of the Ruhr, where the communist vote among the miners was 72 per cent. This dropped to eight per cent, as Marxist leaders who participated in Caux conferences were expelled from the communist party.

In the late 1940s and 1950s, Moir lived in London, handling transport accounts for MRA teams who travelled around Europe and beyond. In the evenings he visited car workers and other trade union leaders in their homes in Dagenham. Moir would challenge them to think about “what is right, not who is right” during negotiations with management.

In 1962, he married Kath Andrews in Cathcart Trinity Kirk, Glasgow. She commented that, when they first met, he was in Army uniform. “He rode a motorbike and that interested me—a dashing young man riding something fast! As I got to know him, I was soon aware that he had a guiding star in his life, and that attracted me.”

They made their home in Aberdeen for over 30 years. There they got to know shipbuilders, dockers, farmers, councillors, trade unionists and trawlermen, to help them answer the challenges facing their industries, often rooted in human relationships.

Moir particularly befriended Gilbert Buchan, then President of the Federation of Scottish Fishermen, at a time of difficult relations with the French over European fishing rights. Hurts from wartime experiences needed healing, and Moir accompanied Gilbert and others to important encounters in London, France, Brussels and Strasburg. A fishing agreement, known as Blue Europe, was eventually agreed in January 1993. This surprised the public and in a radio interview, Simone Veil, former President of the European Parliament, described the agreement as “miraculous”. Moir’s role was crucial to this agreement, but he had no interest in claiming credit. He was content to play his part.

In 1983, Moir, a first-time participant in the General Assembly of the Church of Scotland, proposed a motion supporting 123 pastors of the Dutch Reformed Church in South Africa. They had called for an end to Apartheid, challenging the DCR’s theological justification for “separate development”. Moir’s motion was passed, and their message of support was sent. Professor Piet Meiring of the University of Pretoria commented that when the DCR confessed the sin and heresy of apartheid, “Finlay was ready to celebrate with us.” He and Kath “were true friends and ambassadors of reconciliation… He had no position. But his calling by God gave him an authority to put himself into situations where trust was built.” As elsewhere, Moir was not a policy-maker but a people-connector, enabling better policies to be made.

Finlay’s son Alistair recalls a road trip they did together from Pretoria to Harare in Zimbabwe and back in 1997. “We had a lot of fun, sharing the driving, getting lost, and almost running out of fuel. It was a little hairy but we forged a real friendship on that 2,000 km round trip. I’ve never forgotten it.”

Finlay and Kath moved to Edinburgh in 1998, becoming Elders at Liberton Kirk. Their belief that God had a purpose for everyone remained a driving force of their lives.

Kath predeceased Finlay in November 2020. They are survived by their son Alistair, who works on humanitarian and development programming for the Foreign, Commonwealth and Development Office, and his wife Phillipa.

First published in The Scotsman, Edinburgh, 16 May 2022