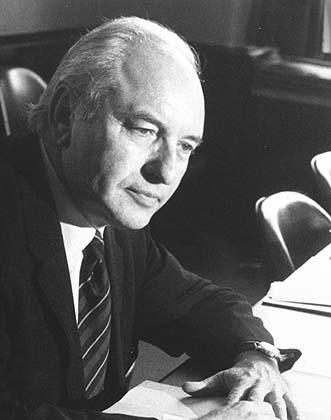 When over 50 incidents of supermarket looting broke out in Rio de Janeiro and 20 other locations in Brazil recently, the people chanted, 'We are hungry.'

They had taken to the streets in reaction to the latest stringent conditions imposed on Brazil by the International Monetary Fund (IMF). While wages have been pegged, prices in the shops continue to rise and the cruzado has been devalued by 27 per cent. There are, says Dr Jones Santos Neves, one of Brazil's leading employers, some 500,000 children without adequate food. Many have resorted to eating bird food.

Dr Blanchard and Dr Santos Neves were sharing a platform at a special forum on the Third World's debt crisis, during an MRA industrial conference at Caux, at the end of August.

The Third World's debt had now risen to over $1,000 billion, said Dr Blanchard. Yet public opinion in the rich countries was hardly aware of the scale of the problem.

He firmly linked the debt crisis with the battle to end poverty and unemployment in both the developing and industrial nations. While unemployment in the industrialized countries had stabilized at 30 million -'still a persistent cancer on our Western societies' - in the Third World unemployment had reached a 'giddying' 500 million, with a further 500 million underemployed.

But, on a brighter note, he predicted that the second half of 1987 could mark a turning point in coordinating multilateral approaches to the debt crisis. In November the ILO plans a conference in Geneva that, for the first time, would bring together the IMF, the World Bank, the OECD (Organization of Economic Cooperation and Development) and the relevant UN agencies. It would be a chance to 'mobilize around the central theme of tackling poverty in the world', he told the forum.

Both Dr Blanchard and Dr Santos Neves warned about the increasingly impossible burden of debt repayments. 'Net financial flows are no longer going from north to south but from south to north,' said Dr Blanchard. 'There is something shocking in that situation.'

Dr Santos Neves, who is President of the International Relations Committee of the Brazilian Confederation of Industry, said that Latin American countries were now paying five per cent of their gross national product in debt repayments. It was more than twice the rate that Germany had had to pay in reparations after World War I (a situation that had led to runaway inflation and the rise of Hitler).

Former British Ambassador to Uruguay, William Peters, who took part in the forum, spoke to for A Change about the move made by major US and British banks to make provision against bad debt. This had sent a shock wave through Third World countries, he said. It was a clear signal that the banks would be far less inclined to lend money in the future.

And yet in the poorest countries since 1986 15 million mothers had watched their children die before their first birthday. A spirit was needed which aimed at safeguarding the living conditions of the poorest rather than protecting international financial positions.

Dr Santos Neves strongly supported systems for converting debt into venture capital. Targeting investment on small and medium-sized firms in the developing countries would also help to create the most number of jobs, he said.
'Debt is a technical problem but it is first and foremost a moral problem,' said Mgr Mullor Garcia, Apostolic Nuncio in Geneva. At stake were the fundamental needs of the unemployed. The Vatican had spoken out 'with an ethical approach' to the debt crisis in its report drawn up by the International Justice and Peace Commission. It touched not only on the need to deal with corruption but also with 'the groups who profit from debt'. It was, he said, 'an ethic for survival reaching out for a new world'.

First published in For A Change magazine, 10 January 1987